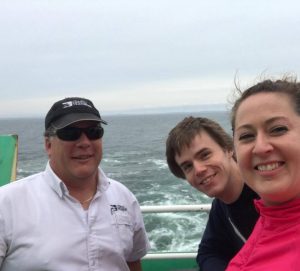 As part of the ECOHAB project, we at the GOMLF have deployed drifters (both surface and drogue) in the Bay of Fundy to help modelers.

The goal of this project is to better understand the role of the Bay of Fundy gyre, a large system of circular currents formed by global wind patterns and forces created by Earth’s rotation, in regulating blooms of Alexandrium fundyense in the region. The resting stages of the organism, known as cysts, are abundant in sediments underlying the Bay of Fundy gyre. When conditions are right, the cysts germinate and swim upward into well-lit surface waters, where the gyre retains them and they grow and mature.

However, the gyre has “leaks” that send water out into the Gulf of Maine coastal currents, potentially transporting the Alexandrium fundyense cells to the south and west along the coast of Maine. A key goal of the research is to quantify the “leakiness” of the gyre and its impact on year-to-year variability of PSP along the coast of eastern Maine.

To read more about the project, read the full article “Drifters May Help Improve Regional Harmful Algal Bloom Forecasts in Gulf of Maine” which was published by the NEFSC in June 2017.

In 2017, we deployed 5 pairs of surface and drogue drifters from the Bay of Fundy. Their stories are summarized below. 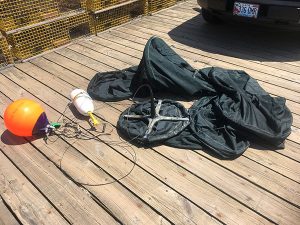 The first pair in the project was released off the Grand Manaan Adventure by Cassie Stymiest (GOMLF) and Brady Quinn (UNB). Northeast winds drove both the surface and drogue towards the Southwest. The drogue unit reported episodically while skirting, perhaps dragging, along the Downeast coast, made it to Boothbay area in mid-June. It was finally recovered all in one piece (see photo) by the Maine Marine Patrol’s Matthew J Sinclair (thanks to Katherine Thompson at DMR), delivered to Boothbay, and brought to Woods Hole by Gabby at UMAINE. The surface unit, however, ended up on Browns Bank several weeks later and, in August 2017, had come all the way back to the Bay of Fundy!

The second pair was deployed by Kalen Mawer and Lydia White off Grand Manan Adventure. The surface unit was picked out of the the water by mariner and redeployed. The drogued unit was retained east and north of Campobello for a few weeks and finally landed near the ferry dock in North Head on 16 June. JiM sent an email to the Whales & Sails people asking for help and Brady looked for it but it was apparently recovered from the beach. 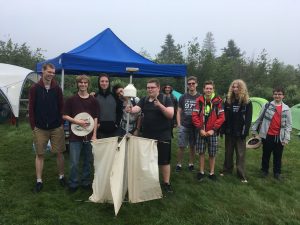 The third pair was deployed by Brady & Kristin off Ferry. Drogued unit apparently came ashore 3 days later on the west side of Indian Island (west of Campobello) but stopped transmitting and never heard from again. Surface unit took an unusual route skirting the southern tip of GM in early July, almost getting caught in Willy Cook’s salmon pens near Seal Cove Dock, recovered by Willy, redeployed a few days later, oscillated in the Seal Cove Sound for a while until coming ashore near the Ancourage Provincial Park Campground. The ladies at the desk (Shawna, Anna, and Jennifer) talked to JiM. After these three different phone calls and a couple of emails, JiM noted campsite #59 where it was apparently brought to. The office workers went to retrieve it where a boy scout troop was staying and were photographed by Peter Cruickshank, the student recruiter for Western University in Ontario, CA but, Laurie Murison, a drifter enthusiast from the past who had been watching its movement, sent her husband Ken to snatch it from the boy scouts.

The surface unit that washed ashore a few times near Seal Cove was brought to Capt Vincent who redeployed it off the ferry at the standard site north of the island. It moved quickly north and, went well north of the Wolves but, a few days later washed up in Meadow Creek Cove on Campobello Island where it was recovered by Calvin and Laurie Mallock, the same fishermen who had recovered a miniboat a few weeks earlier. This same transmitter went on another deployment in August off Tioga. 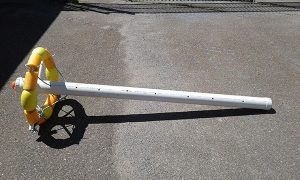 Our colleagues from UNB St John released several pipe drifters in a separate study and provided us with the data so we could map tracks with ours. 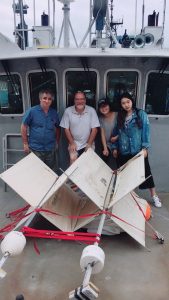 The fifth and final pair of the season for the project was deployed by Bruce Keafer off the R/V Tioga. Drogue at standard site ended up grounded at Welsh Pool off Campobello. Surface unit at standard site recovered by Jason in a dingy off Black Harbor, redeployed off the ferry by Cap Vince on 8/20, took out of water by Duane Galley on 8/26, recovered by Joe Finnegan from NEFSC. Another surface unit was deployed at ESP-1 (ID = 178440661) headed up bay and oscillated with the tide for months before finally coming ashore just outside Minas Basin on the 1st of December.