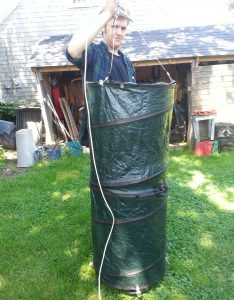 We have been developing a low-cost alternative to the standard drogued drifter. We try to keep the basic configuration the same in order to maintain the oceanographic-standard 40:1 drag and to use materials available at any hardware store. The idea is that the drifter can be built in any high school shop class, for example, in a matter of hours. We originally tried to make our own drogues from vinyl cloth, plastic or fiberglass hoops, and heavy duty glue but found that to be a labor intensive job. We also bought commercial drogues for a few years. In 2013 we found that pop-up leaf bags available at our local hardware store can serve as drogues when zip-tied together in series with their bottoms cut out. More recently we have found that toddler play tunnels available online and at children’s stores serve as excellent drogues. These appear to be more durable than the leaf bags, and are also longer than leaf bags. We are still in the process of testing these drifters, but as of 2015 they seem to be working well. 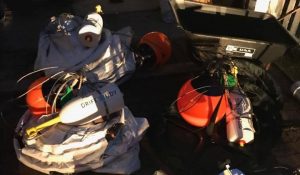 The top part of the drogue is fitted with a 3-point bridle and the bottom is weighted to keep it vertical in the water column. This is tethered to the surface float and the transmitter is embedded in the top of this float. The float we use now is called a “Canadian lobster buoy”. It has a plastic-coated metal loop on the bottom where we can easily shackle out tether.

A note on design

We keep the basic configuration/size the same in order to maintain the oceanographic-standard drag but try to use materials available at any hardware store. The idea is that the drifter can be built in any high school shop class, for example. It is a project in materials science. See our full list of models under the “Drifter History” tab. They all have a cross-sectional area of approximately one square meter and, since the electronic package is getting smaller, we have been able to further reduce the windage with each new design.